The Waterbird Refuge project (formerly referred to as black swan habitat island project) has grown from the City’s South Perth Foreshore Strategy and Management Plan (SPF Plan) which identifies Node 7: The Lakes as an area to be developed as a water-based, ecologically focused precinct, restored, expanded and integrated into its surroundings. The SPF Plan also identifies the area as a location to be developed for bird breeding.

The primary aim of the Waterbird Refuge project is to protect the foreshore reserve, improve habitat for native waterbirds and protect the riverbank from erosion, while providing a retreat for bird watching, breeding, ecology, and learning.

The project will replace damaged river walls with a habitat island, two vegetated headlands, a beach, and a planted rock revetment.

The City has successfully secured $700,000 in funding from the Parks and Wildlife Service at the Department of Biodiversity, Conservation and Attractions to support the $1.5 million project.

The City has started growing approximately 11,000 native plants, and 20 trees in its nursery for the project. The new trees will replace the introduced Casuarina species that have self-seeded in the area.

The City is working with community groups including volunteers from the Friends of the South Perth Wetlands to assist in environmental monitoring of the area. Bird numbers and nesting sites in and around the area will be counted before and after the project is constructed.

Construction of the Waterbird Refuge is anticipated to commence early 2021 subject to planning approvals and is expected to take six months to complete.

Where is Node 7: The Lakes located?

Node 7: The Lakes is the area of South Perth Foreshore that sits east of Coode Street. This area contains a series of interconnected man-made lakes – Hurlingham Lake, Douglas Lake and Lake Tondut. It is an attractive and peaceful environment with an abundance of birdlife.

How do I find out more?

This page will be updated as more information becomes available - please view the progress tab below for the latest news about the project.

The project aims to improve habitat for native waterbirds and protect the riverbank from erosion.

The project will improve habitat by providing:

The project will protect the riverbank from erosion by providing:

The Waterbird Refuge project has a history that dates back 20 years. The timeline below details how the project came to be.

2000: The State Government released the Bringing Back the Swans report which included recommendations to increase black swan numbers in the river. One of the three sites recommended for improvement was in the vicinity of the proposed Waterbird Refuge due to proximity to the freshwater lakes.

2005: The City of South Perth produced the Foreshore Renovation Plan that took on board the recommendations of Bringing Back the Swans report and included a habitat island. The Plan was endorsed in principle by Council and the Swan River Trust and was discussed with traditional owners.

2015: The South Perth Foreshore Strategy and Management Plan (SPF) further developed the scheme with the formation of The Lakes Node. The node is conceived as a water based, ecologically focused precinct, restored, expanded, and integrated into its surroundings to provide a retreat for bird watching and breeding, ecology, and learning. The SPF Plan was endorsed by Council and supported by the community who were engaged throughout the formation of the Plan.

2018: The City engaged marine engineers MP Rogers and Associates to assess the condition of the 800m long river wall from Coode Street to Ellam Street to determine the state of the asset. The condition assessment confirmed that the entirety of the wall is significantly degraded, with significant voids under the top panel slabs and voids behind the walls. Also, the reinforcing bar in the wall is exposed and oxidised due to the corrosion of the concrete wall. The existing wall poses a safety hazard and is an erosion risk. A concept design was subsequently prepared by MP Rogers that included the Waterbird Refuge project.

FAQs
Why are we creating a Waterbird Refuge at this location?

The Waterbird Refuge at Node 7: The Lakes (the area of South Perth Foreshore to the east of Coode Street) will provide an overland link between salt and freshwater habitat (the river and the lakes) to improve habitat for native waterbirds and protect the riverbank from erosion.

Upgrades to the South Perth Foreshore are driven by the community supported and Council endorsed SPF Plan.

The Waterbird Refuge will deliver on specific strategies and actions for The Lakes which are outlined in the SPF Plan. These include:

‘Develop The Lakes node as a water-based, ecologically focused precinct, restored, expanded and integrated into its surroundings; providing a retreat for bird watching/breeding, ecology and learning; with volunteers involved in ecological restoration programs; and develop the location for the establishment of a swan breeding habitat; with an interpretive centre and café; and provide for family recreation with picnic facilities and play areas including a nature play space.’

What are the environmental objectives of the Waterbird Refuge?

The Waterbird Refuge aims to improve the area as a water-based, ecologically focused precinct.

The primary objective of the project is to protect the foreshore reserve, improve habitat for native waterbirds, while also protecting the riverbank from erosion.

Damaged river walls will be replaced with a habitat island, two vegetated headlands, a beach, and a planted rock revetment.

The project also aims to provide a retreat for birdwatching, breeding, ecology, and learning.

The City is working with community groups including volunteers from the Friends of South Perth to assist in environmental monitoring of the area. Bird numbers and nesting sites in and around the area will be counted before and after the Waterbird Refuge is completed.

The City has started growing approximately 11,000 native plants, and 20 trees in its nursery for the project. The new trees will replace the introduced Casuarina species that have self-seeded in the area.

What legal responsibilities does the City have to maintain the river wall?

Under the Swan and Canning Rivers Management Act 2006 management of the river wall is a shared responsibility between the Parks and Wildlife Service and the City.

Can the City repair the existing river wall?
Replacement of the river wall is the most cost-effective option due to the nature and degree of degradation of the wall.
Can we have a natural river edge?

The City, together with marine engineering consultants MP Rogers investigated the option of having a natural planted river edge with no walls or rockwork, similar to Salter Point.

Following a detailed site assessment, the consultants determined that due to the exposed location, a natural edge would cause the parkland to retreat as the river eroded the banks. This is not in keeping with the City’s commitment to the objectives of the SPF Plan or with our legislative responsibilities under the Swan and Canning Rivers Management Act 2006.

Why are the existing trees being removed?

The existing Casuarina cunninghamiana trees, commonly know as river sheoak will be removed. These trees are considered weeds as they are not native to Western Australia and they spread their seed along the river bank.

The trees will be replaced with local species. The City has started growing approximately 11,000 native plants, and 20 trees in its nursery for the project.

The primary aim of the project is to provide habitat for native waterbirds. To protect birds,the beach will be prohibited to dogs. Signage will be provided on the beach to enforce this restriction while a balustrade along the edge of the pathway will remind people that the beach is for birds only. The balustrade will be high enough for birds to pass under.

Will I be able to access the beach or habitat island?
The primary aim of the project is to provide habitat for native waterbirds. People will be discouraged from occupying the beach, however you will be able to bird watch from the footpath.
How will the success of the project be measured?
The City is working with local community groups to undertake environmental monitoring of the area. Bird numbers and nesting sites in and around the area will be counted before and after the Waterbird Refuge is completed.
Has sea level rise been considered?
The river edge treatments have been designed with a capacity for 50 years of sea level rise. During peak events, less overtopping (water breaching the river edge) will occur than with the current wall. To protect the foreshore from all overtopping would require a taller rock revetment that would obstruct views.
When will the rest of the degraded river wall between Coode Street and Ellam Street be upgraded?
The City will continue to work with the Parks and Wildlife Service to plan upgrades of river edge between Coode Street and Ellam Street. The river wall will be upgraded in a staged approach over about a decade as funding is available.

Will my views to the river be affected?
Trees will be removed to facilitate the new project, however they will be replaced by new more suitable trees which will take time to establish. The aim is for no net loss of views from tree planting.
Progress 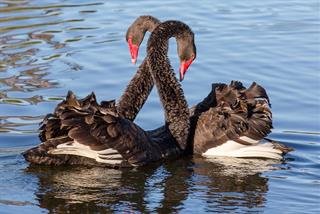 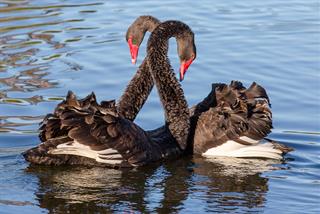 A Waterbird Refuge will be created on South Perth Foreshore to improve habitat for native waterbirds and protect the riverbank from erosion. 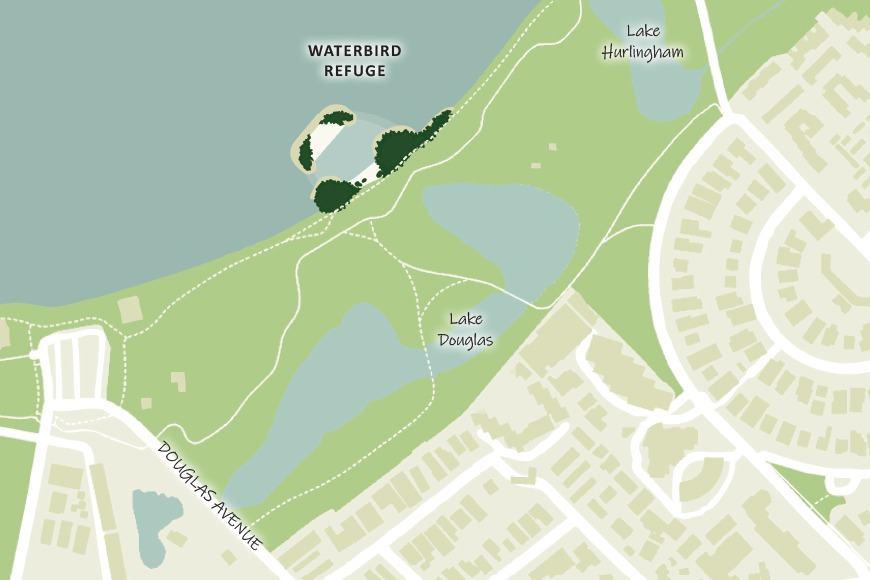 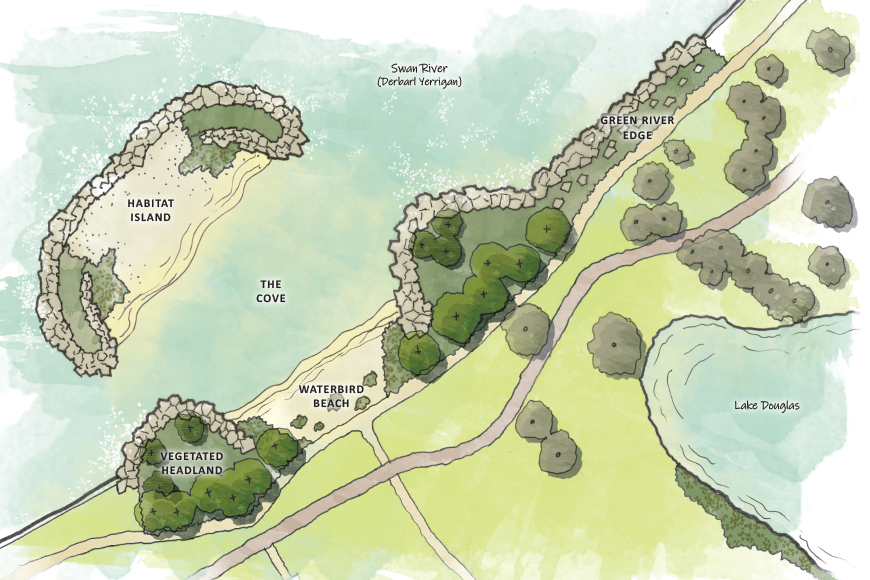 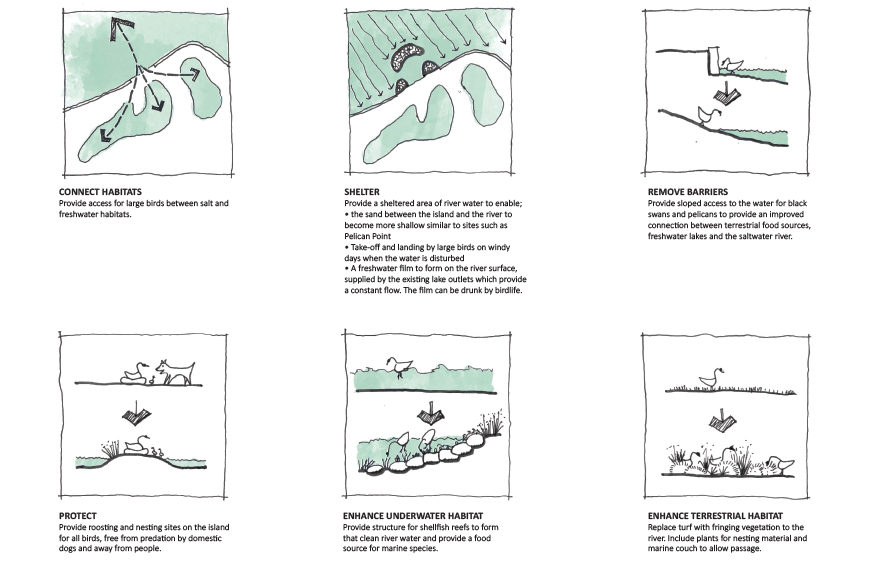 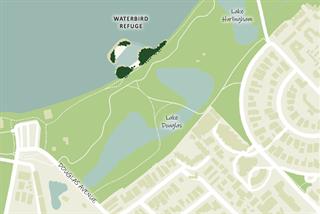 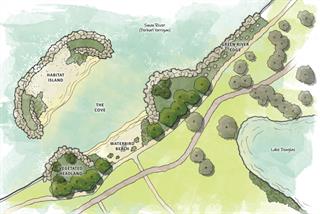 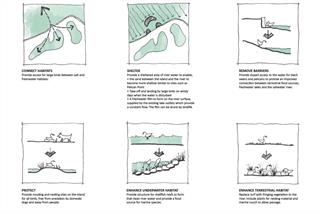