A restored B class tram engine that once ran along Mends Street to Mary Street, Como has been restored and is open to the public next to Heritage House in Windsor Park, South Perth.

The tram has been relocated to Windsor Park, close to the original tram line in acknowledgement of the role that the trams played in the development of South Perth. It provides a glimpse of life that was once commonplace in that area which encompasses a unique and rare group of civic and social heritage buildings including Heritage House, the Post office, the former Police Station and the Old Mill Theatre.

Restoration of the ‘Ferry Tram’ has been faithfully executed and is an excellent representation of how the tram appeared when last in service in South Perth in 1950.

The ‘Ferry Tram’, built in 1899 was one of two B class trams tram in operation between 1922 and 1950 allocated to the ‘local’ South Perth service and referred to as the ‘Ferry Trams’.

The first tram services in Perth commenced on 25 September 1899 and as South Perth grew more affluent, demand for a dedicated service south of Perth Water grew. On 9 June 1922 construction began on a line from Canning Highway to Como. The route along Angelo Street to Perth Zoo was completed in August 1922, with the long-awaited connection to Como terminating at Mary Street in October. A further extension in 1924 connected Angelo Street and the zoo entrance on Labouchere Road. In 1926 the Mends Street ferries and the trams were linked, with a section of track laid from the jetty to Labouchere Road.

The South Perth and Como lines were extremely popular on weekends and public holidays, requiring extra cars to deal with excited children and holidaymakers. Thousands visited Como Beach by tram, transforming an isolated jetty into a crowded resort, complete with dancehalls, refreshment kiosks, cinema and a roller skating rink.

B class trams were common on the South Perth tramways. Outside peak hours they were often operated by one man, who both drove the car and collected fares. Transport provided by the tramways played a significant role in the development of the South Perth district between the wars.

Restoration of the ‘Ferry Tram” has been faithfully executed: the roof was in good condition, but some other sections had deteriorated, and many wooden parts had to be replaced using patterns from good sections or from another B-class tram.

An exciting exhibition recounting the history of trams in South Perth, along with an informative video, is on display in Heritage House next to the tram. For more information visit the South Perth Historical Society website. 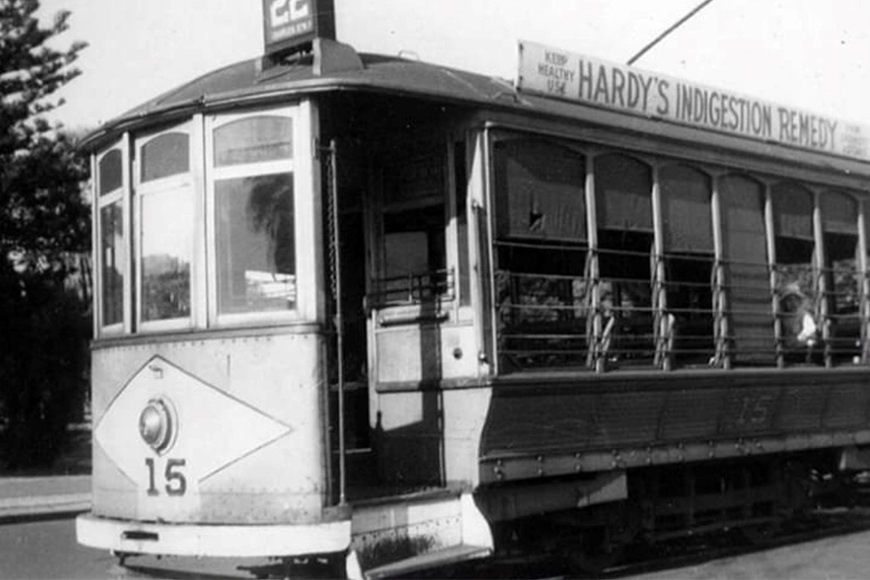