Artwork to celebrate the evolution of transport

South Perth Foreshore will soon be home to an innovative public artwork as part of the City’s partnership with RAC. Standing three metres tall, the artwork titled Vehicles of Change is a celebration of South Perth as a place for innovation in transport and the home of the RAC Intellibus®, Australia’s first public roads trial of a driverless electric vehicle.

The artwork is being created at a Margaret River studio by prominent Western Australian artist team, Tony Jones Art Projects, which includes Tony Jones, Ben Jones and Angela McHarrie. Installation will start next month at the eastern end of South Perth Esplanade opposite the Intellibus® Hub.

The concept for Vehicles of Change was inspired by classic futuristic designs from popular science fiction and automotive design, looking forward to the transformative advances in transportation that the RAC Intellibus® is paving the way for.

Transport is central to the history of the City of South Perth, an area shaped by the introduction of regular and reliable ferry services at the turn of the 20th century, the expansion of the tramway network to South Perth and Como between the wars and the construction of the Narrows Bridge and the Kwinana Freeway in the late 1950s. 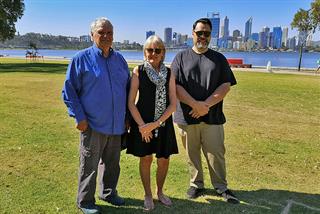 The City of South Perth in partnership with the RAC is excited to announce an iconic new art project for the South Perth Foreshore, focusing on the evolution of transport and its impact on our community.ee