Habitat to bring back swans

A new haven for waterbirds has been built along the Swan River as the City completes its $1.5m Black Swan Habitat project in partnership with the Department of Biodiversity, Conservation and Attractions (DBCA). The significant environmental project has repaired damaged river walls and created vital habitat for black swans and other wildlife.

A official opening ceremony was held on Thursday 30 September 2021 and the Whadjuk Noongar name of the habitat island was announced. The river is a sacred place for Noongar people and with respect to the traditional custodians of this land, the Black Swan Habitat island has been named Djirda Miya, meaning ‘home of the birds’.

Covering an area of 5,000 square meters, the Black Swan Habitat comprises a sheltered island for birds to nest safely, two vegetated headlands and a beach area that will allow waterbirds to take off and land in a sheltered area when the water is rough. The project has been designed to enhance the foreshore and protect the riverbank from erosion in the future.

Approximately 11,000 native plants and 20 trees grown at the City’s own nursery have been planted as part of the project. Native sedges and rushes have been selected to support biodiversity and provide shelter for wildlife.

The Black Swan Habitat project forms part of the South Perth Foreshore Strategy and Management Plan and is jointly funded by the City and the Department of Biodiversity, Conservation and Attractions through their Riverbank Program. The project is also the last outstanding major recommendation of the State Government’s 2000 report, Bringing Back the Swans, which set out to increase the number of Black Swans on the river that bears their name.

City of South Perth Mayor Greg Milner said the project provided multiple benefits to the environment and the community.

“The City secured a grant from the State Government to make the Black Swan Habitat a reality and our partnership with the Department of Biodiversity, Conservation and Attractions has been central to its success.

“The Black Swan Habitat is the first project of its kind in our state. We are particularly proud of the way we have been able to achieve a number of environmental benefits while creating a community asset for ecology and learning. The habitat provides a unique opportunity to observe wildlife in their natural environment without disruption.  We have already seen local schools embrace the opportunity to learn about wildlife conservation by visiting and studying the Black Swan Habitat.

“Our community is passionate about this project. Volunteers from the Friends of South Perth Wetlands community group have assisted the City to monitor bird numbers, species, breeding and migration.”

“The whole-of-foreshore planning approach, outlined in the South Perth Foreshore Strategy and Management Plan, provided real opportunities to think about a variety of foreshore treatment options and the Department of Biodiversity, Conservation and Attractions is delighted to see a beach and headland solution, providing multiple benefits for the environment, particularly waterbirds, implemented in Perth waters.”

Learn more about the project. 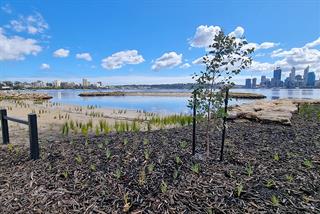 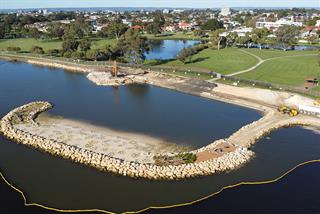 Local waterbirds are preparing to move in to their new home as work on the Black Swan Habitat nears completion at South Perth Foreshore. 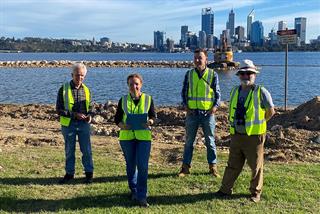 A group of local volunteers are assisting the City in an important environmental project to create habitat for waterbirds. The Friends of South Perth Wetlands community group visit South Perth Foreshore several times each week.