Urban forestry is the practice of managing and maintaining trees and significant vegetation in City areas. A healthy urban forest is a vital community, environmental and economic asset.

The City of South Perth is known for its tree-lined streets and green spaces. Home to nearly 400 hectares of urban forest on private and public land, there are over 100 hectares of natural areas with significant tree cover in the City. Our urban forest is made up of trees and shrubs on public and private properties, along streets and in reserves.

The value of the urban forest

The urban forest contributes to the health of the City’s residents, its environment and the economy. It provides a number of important functions including:

Challenges for the urban forest in the City of South Perth

Despite its value, the urban forest in the City, as in cities across Australia and the world, is facing pressure from urbanisation, development, climate change and public perception. The Perth metropolitan area has doubled since the 1970s and this has resulted in the clearing of large areas of native vegetation. Over the last 30 years, canopy cover in the City of south Perth has increased by 20 per cent on public property and decreased by 20 per cent on private property.

There are a number of threats to the urban forest:

How the City protects its urban forest

The City manages and monitors over 26,000 trees on bushland and foreshore environmental reserves as well as an unidentified number of shrubs. A dedicated tree planting scheme has seen the City of South Perth’s canopy cover remain consistent over the last 30 years.

The City actively works to protect and enhance its urban forest by:

As the City faces increasing impacts from climate change, including drought, heat, diminishing groundwater levels, salinity and sea level rise, it will become vital that the urban forest is preserved and actively managed for future generations of humans and wildlife. Trees in urban spaces will help to reduce many of the impacts of climate change, providing important shade and cooling in a warming climate.

The City of South Perth’s Urban Forest Strategy was formally adopted at the Council Meeting on 31 July 2018.

The strategy has been developed to identify opportunities to manage the challenges of urbanisation, development, climate change and population growth. It provides a clear direction for the City, Council and the community on urban forest management in both the public and private realms.

It is intended that this strategy will improve the perception of trees, including their contribution to human and environmental wellbeing, and ultimately lead to their protection into the future.

How you can help 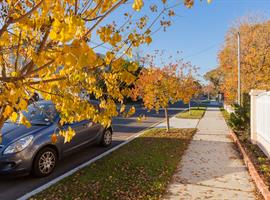 Many areas in the City of South Perth are experiencing a significant loss of trees on private properties. It is critical that these trees are preserved wherever possible. Trees are an important asset that provide many environmental, aesthetic and cultural benefits to the community.