The following extract has been taken from page 47 of Hughes-Hallett, D. (2010) Indigenous history of the Swan and Canning rivers.

'It is believed by Lyon (in Collard et al, 1996) that the South Perth area was the country of Beeloo Nyoongars or river people. The Key Nyoongar figure at the time of colonisation was described by Lyon as Munday. Nyoongars who used this area were known as Gareen and their place was Gareenup.

An important camping and fishing area was situated between the present day Richardson Park and Mill Point (Gareenup) and this area was referred to as Booryulup or the place of the Booryul or magic people. This area has since been covered by the Kwinana Freeway. The area stretched for approximately one and a half kilometres of foreshore and 150 metres into the bushland to the east of Melville Water. Today the foreshore reserve is called Milyu which is an Aboriginal but not Nyoongar word for samphire.

The Como foreshore was a place for digging holes or Beenabup. Nyoongars referred to the area of rushes near Millars Pool as Goorgygoogup. The South Perth foreshore side of Perth Waters is known by Nyoongars as Gaboodjoolup or ‘the place of the shore’. Further east is Joorolup or ‘place of the jarrahs’.

It is recorded (Bates, 1992) that Nyoongars would camp in the South Perth area when the beere or banksias were flowering and extract honey from the blossom. A spring which was on the Melville Water side of South Perth was widened by the Nyoongar at this time of year and blossoms were left to ferment in the water. The fermented drink was then consumed as part of this special occasion.

After colonisation, one of the earliest recordings of Nyoongar presence in the area occurred when a party of thirty men from the Bidjareb (Pinjarra) Nyoongar attacked Shenton’s Mill. The leader of the party, Gcalyut, was later jailed.

After about 1850, a camp near the present day Causeway was established and occasionally Nyoongars would use the South Perth area (Florey, 1995). During the 1930’s and 40’s the Parfitt and Pickett families, among others, lived here. At this time other families visited the area to catch prawns, bees, fish and crabs'.

Please note: The local Aboriginal people and traditional owners of this land in the City of South Perth are often collectively known as the Noongar people. There are a number of alternative spellings in use for the word Noongar. After consultation with Aboriginal Engagement Strategy Working Group (AESWG) and others, the majority agreement was to use the spelling Noongar. This will be used by the City of South Perth in a consistent manner. The AESWG, after discussion decided that Noongar, meaning male, does not fully represent our group and community and therefore will refer to the traditional Aboriginal people of our areas as the Noongar/Bibbulmun people. 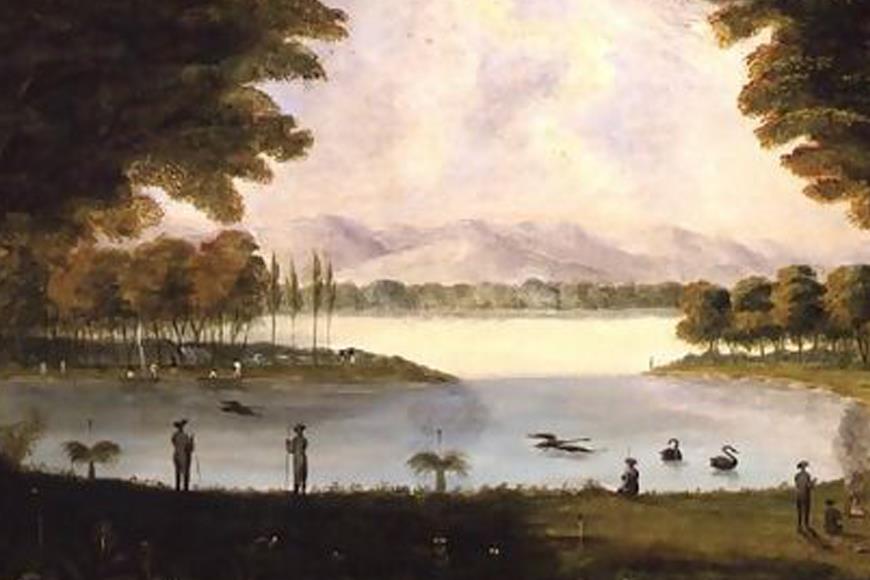 Picture: Setting up Camp of the Naval Survey Expedition, at the Mill Pool, Perth, Western Australia, by Frederick Rushbrook Clause, 1828, oil on Canvas, from the Holmes á Court Collection.